To Gain or not to Gain: That is the Ecological Question 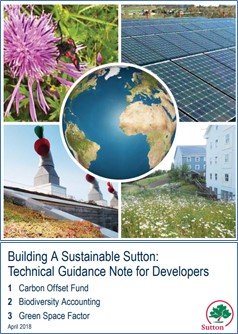 “Whether ‘tis nobler in the mind to suffer

The slings and arrows of outrageous fortune,

Or to take arms against a sea of troubles,

And by opposing end them?”

If nature had a human mind and the ability to express itself in poetry, I’m convinced it would utter groanings similar to Hamlet’s at the injustice of his plight. What soul has not found pleasure in the peacefulness of pastures or delight in the shelter of the woods? What ear has not been captivated by the song of birds in the spring morning? What eye has not  found charm in the flight of butterflies in summer? All these things and more we take in, but our relationship with nature is broken. At best, we give very little in return; but how do we know how much we aren’t giving?

In Sutton, the answer has recently moved from being a philosophical one. All planning applications for major new development in the borough has to be ecologically accountable through a Biodiversity Accounting policy summed up as ‘No Net Loss and Net Gain.’ The  Department for Environment, Food and Rural Affairs (DEFRA) defines ‘Biodiversity Net Gain’ as “an approach to development that aims to leave the natural environment in a measurably better state than beforehand.” The simple math of the matter

The value of the habitat where the development is to take place is calculated by multiplying the area, distinctiven Distinctiveness: Ranging from low (score 2) to high (score 6), habitat distinctiveness is expressed in numerical value. Priority habitats, such as woodlands or hay meadows have high distinctiveness, whereas highly modified  habitats, like arable farmland or amenity grassland are low scoring.

Condition: Habitat condition is determined by the number of species found on the site as well as presence of invasive species, site management and pollution levels. Condition weighting ranges from 1 (poor) to 3 (good).

Post-development values include the length of time and the level of difficulty involved in habitat creation. For example, creating a woodland would take hundreds of years and be very difficult while a species rich hedgerow may take only 15 years to create and have a low level of difficulty.

Factoring in time and difficulty ‘risk factors’ allows us to estimate  the ‘post-development value’. When we subtract this value from ‘pre-development value’, we obtain a final habitat value that tells us whether we are ending up with biodiversity net loss or  net gain.

In Sutton, Biodiversity net gain aims to be broadly useful and systematic in making sure biodiversity is protected and enhanced quantitatively. However, not every borough in England adheres to the use of this approach. In fact, we are the only borough in the whole of London to use biodiversity accounting and the approach is only voluntarily adopted by a handful of Local Planning Authorities in England. View of Sutton from The Warren conservation site. Deaville 2019

Back in December 2018, things got a great deal more interesting as DEFRA launched a national consultation proposing the introduction of a mandatory ‘biodiversity net gain requirement’ for all development decisions controlled at the Local Planning Authority (LPA) level. This is an attempt to improve the current planning system in England to “protect the environment and build places to live and work.” After consultation on the new rules were opened, Environment Secretary, Michael Gove, said: “Mandating biodiversity net gain puts the environment at the heart of planning and development” (IEMA). Stakeholders such as the development industry, ecological and environmental consultancies, conservation organisations, planning authorities, planning consultancies and the general public were invited to participate and express their views on the proposal. DEFRA wanted to find out whether this approach should become a nationwide standard so compliance with biodiversity policy is clearer for developers. They also wanted to see whether this approach should be made a legal requirement and how to implement, measure and monitor it. The results of this consultation have not been made yet public.

However, a few weeks ago, Chancellor Philip Hammond announced in his Spring Statement that the government will use the forthcoming Environment Bill to mandate ‘biodiversity net gain’. This could mean that the delivery of new infrastructure and housing is not at the expense of vital biodiversity. In the words of  Andrew Sells, Chairman of Natural England, which helped develop the net gain proposals, “Net gain is an ambitious idea that has the potential to bring significant benefits for our declining wildlife and the environment as a whole. “If net gain succeeds for nature then it will also be succeeding for people, because it means that they are living and working with a thriving natural environment all around them.” It is quite likely that there will be much debate on how to implement a change of this magnitude and complexity. The future of nature conservation in our country is about to take a giant step and ensuring it is in the right direction is of vital importance. At this stage, there are many aspects of net gain approach that require careful consideration and negotiation from all parties involved in order to deliver the expected positive outcomes. Perhaps the major advantage of making biodiversity net gain mandatory is the prospect for developers to be able to value the ecological worth of a site and work toward attaining net gain. We would see an increase of native trees, green corridors, living roofs, wildlife ponds, bird and bat boxes in the nation. Great news for wildlife, really. Yet, there are many challenges in the legislation that need refining. DEFRA needs answers to the relevant who, what, where, when and how the approach is to be implemented.

The local government and DEFRA will need to agree on the level of support and guidance that will be needed to create a healthier environment for people and wildlife. Given that so few boroughs have experience in using net gain methodology, pertinent training and enhancement of competencies at the local authority level will become a must.

Determining appropriate tariffs and what percentage of net gain is necessary will be key in encouraging development that increases  biodiversity accounts. This also means that development that does not meet the biodiversity gain standards will be discouraged. Even though it is still early days to make definitive judgement on this new policy, it is important we all know it’s existence to understand our position as a nation in conserving nature and leaving it in a measurably better state than we found it.