On Saturday 25th May the Biodiversity Gardens project held their first ‘Spiders for Beginners Training Day’ at the Ecology Centre.  The course was led by myself (Robin) with Tom Thomas from the British Naturalist’s Association as our hired spider expert for the day. The course attracted a nice-sized crowd, with different levels of interest in our 8-legged friends. Most were from a conservation background; however we had also attracted an unexpected group – a local family who came to cure their son of a fear of spiders! But what they all shared was a curiosity to know more about these fascinating creatures.
To start the day, the crowd were given a short introduction to the world of spiders, covering basic anatomy, evolution, ecology and ID of key family groups. The crowd learnt of the amazing diversity within spiders and the wide range of behaviours that exist in their life cycles. By the end of the talk, the crowd were ready to put their newfound knowledge into practice. 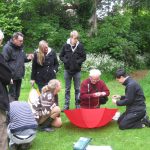 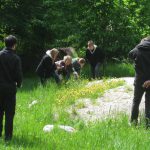 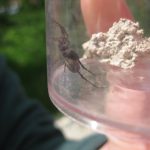 Female wolf spider with egg sac-catch of the day! 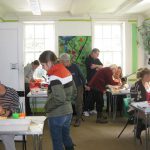 After some tea and biscuits, the crowd headed out in teams all geared up with their boxes full of surveying equipment, ready to catch some spiders. Soon the whole group gathered their energy and were completely encompassed by the task. Teams were sweep netting, tree bashing and sucking up spiders through their pooters all over the Ecology Centre grounds. Tom Thomas also gave us an excellent demonstration on how to catch spiders with an umbrella – a significantly cheaper and in many ways superior beating tray.
It wasn’t until our second round of surveying that we caught some really interesting spiders. One team hand searching amongst the chalk mound created for kidney vetch (Anthyllis vulneraria), managed to catch a female wolf spider (Lycosidae) carrying her egg sac attached to her spinnerets which is a key ID feature for wolf spiders out in the field – definite catch of the day. As spiders came flooding in, Tom had the group sat down and captivated as he shared his wealth of knowledge with everyone with immense passion and enjoyable wittiness.
Back in the classroom, the teams got their spiders under their microscope to get a closer look at them. Identification was difficult, but everyone benefited from seeing the key anatomical features of spiders up close. One definite take home of the day was that everybody could identify an adult male spider from their boxing glove-like sexual organs on the end of their pedipalps….several people were witnessed giving their best Mohammed Ali impressions!
Overall the day was a success, with everybody going away having learnt a bit more about this fascinating world of spiders. Did the gentleman cure his fear of spiders? No. But he did find a spider’s exoskeleton in a web which he seemed pretty pleased about! Hopefully we will see some familiar faces at our next workshop ‘Wildlflowers for Beginners Training Day’ on Saturday 22nd June.  A full list of events can be found on our “Events” page!
Robin Searle
Biodiversity Assitant