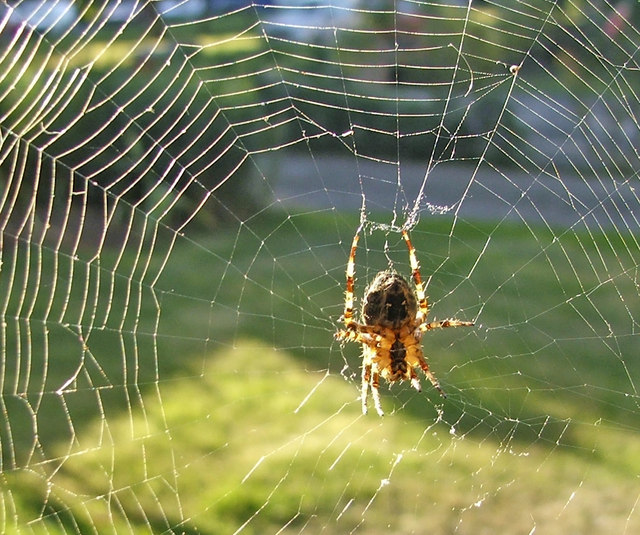 As autumn is now upon us, there are many seasonal changes that you have probably encountered over the past few weeks. You may have noticed the bounty of blackberries growing on brambles; conkers dropping from horse chestnut trees and the classic sign of autumn – the changing colour of leaves. As for animals, it is around this time of year that birds, such as swallows and swifts, begin to flock and form a mass autumn migration. Other animals, like hedgehogs and bats, will be preparing for hibernation over the colder months by feeding on as many insects as they can at the beginning of autumn.

One animal that proves to be a very familiar site at this time of year is the spider. Large numbers of spiders suddenly appear at the start of autumn both outside in gardens, and even in people’s houses. Autumn is the peak time of year to see two really common species of spider in the UK: the House Spiders (Tegenaria species) and Garden Spider (Araneus diadematus). The reason for this arrival of spiders, is that autumn is the time when males start to search for a mate.

Chances are, you have probably already encountered a female Garden Spider waiting for a male to find her. The Garden Spider is a really common spider and a familiar site to most people. They are distinguished by the distinctive cross of pale spots across the abdomen and the classic ‘orb web’ that they weave, a wheel-shaped web with circles radiating out from the centre of the web. Garden Spiders will use their web to wait for an unsuspecting insect to come along and get caught in the sticky silk.  The spider will then detect any vibrations for struggling prey and rush to wrap it tightly in silk, this immobilises their prey so they can then kill it with a venomous bite. It will usually be the large female spiders that you see sitting on their webs in autumn, waiting for a wandering (and much smaller) male to find her. After she has found a mate, the female will lay anything from three to eight hundred eggs, which she will keep wrapped up in silk over the winter, when they will hatch in spring.

The House Spider is another common spider that you will no doubt have seen scuttling across your living room floor or trapped at the bottom of the bath. Male spiders are more widely seen as they go in search of a mate, whereas the females tend to stay in their sheet-like webs waiting for a male to find them. After a male finds a female’s web he will stay with her to mate for several weeks, he then dies and the female will eat him to give his nutrients to their young.

Spiders are having a really good year at the moment, because the mild weather has continued much later in the year than usual, meaning that there has been plenty of invertebrates for them to feed on. There have been suggestions that spiders have grown bigger in size this year because of this bumper year for insects. So keep an eye out and see what spiders you come across this autumn!